The Worshipful Company of Brewers is once again upon us. The charter of this sanctified league dictates that each member of the Brooklyn Brewery brewing team will design and create a batch of his or her own draft-only beer, to be served exclusively in the Tasting Room until the last drop has been squeezed from the taps. 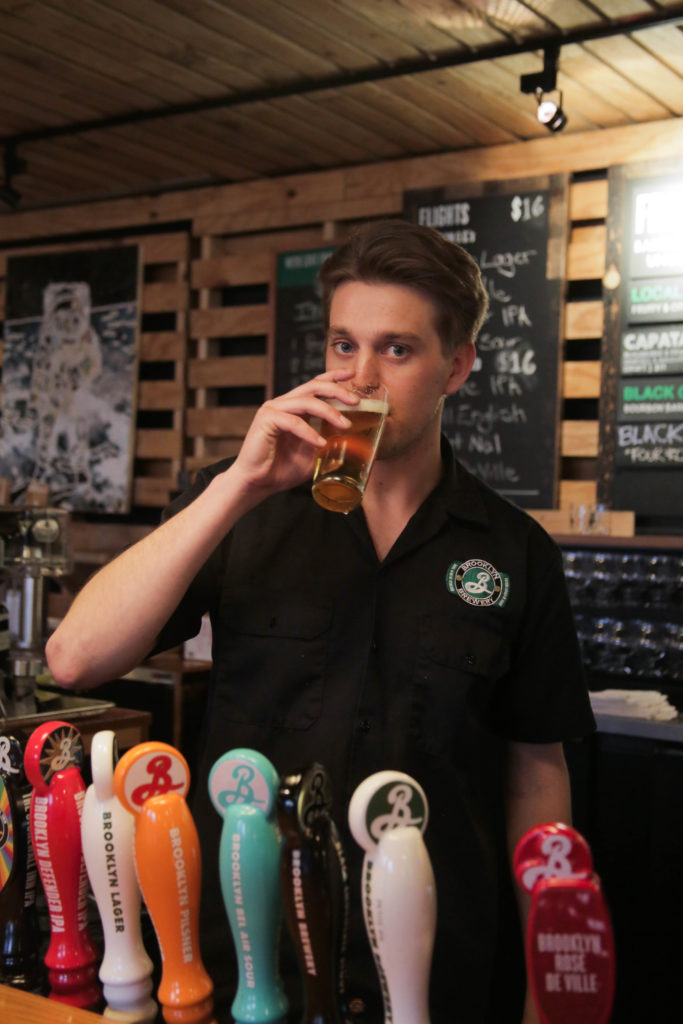 Brewer #22: Evan MacCarthy (seen above keeping an eye on his samples in our QC Lab)
Age: 26
Started at Brooklyn Brewery: September 2016
Favorite Drinking Spot: Capri Social Club in Greenpoint. Sometimes, the soul needs Jello shots.
Good Advice: “Don’t overthink the small stuff.”
Brewer’s Notes: Before Evan’s cheerful smile and wide-ranging knowledge of what makes beer tick became a fixture around Brooklyn Brewery, he was a bicycle mechanic by trade (and he still volunteers as one, if you ask nicely.) He likens bike mechanics to brewing a beer: building a wheel and brewing both appear simple to a bystander, but involve an incredible amount of art and science to do properly. Spokes must be wound and balanced, loads measured and accounted, and an overall feel for and love of the work must shine through.

In his finely tuned American extra pale ale, The True Wheel, a taut but friendly blend of American malts and traditional resin-and-citrus-forward hops create something seemingly straightforward, precisely balanced, and ultimately refreshing. It is meant to be enjoyed with those who matter most. Evan dedicates this beer to his family and friends, and the entire crew at Brooklyn Brewery: “they’re the most talented and hardest working team I’ve ever been a part of, and every day I get to work with them is just awesome.” Raise your glass to Evan, and with Evan, and enjoy The True Wheel as long as it lasts.