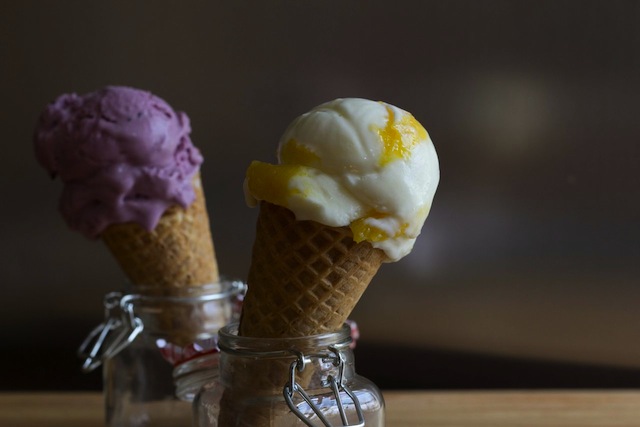 Lemon and raspberry cones, ready for licking. Photo: Hay Rosie
“We’re trying to balance between ‘This is insane’ and ‘This is delicious,’” says Stef Ferrari, owner of Hay Rosie Craft Ice Cream Co. as she feeds me a sample of Bonfire at the Beach–mesquite smoked sweet cream with candied pineapple and coconut scratch (more later on “scratch”).
A former beer brewer, Ferrari took inspiration from her background in positioning Hay Rosie as a micro-creamery, which she opened in May. An amalgam of a Brooklyn Brewery-style factory and a neighborhood ice cream store, all of Hay Rosie’s artisan ice creams are handmade from cream to topping behind a glass-paneled wall, fully visible from the tasting room where they’re scooped into cups or cones.
This is an unusual move, explains Ferrari–most “homemade” ice creams are, in fact, produced from a pre-mixed base. She eschews these shortcuts in favor of making each batch from scratch, stirring in… Read More
SOURCE: Brooklyn Based»Brooklyn Based – Read entire story here.