See this story at BrooklynDaily.com. 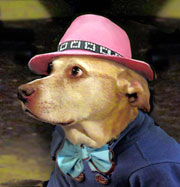 Calling all dogs to the catwalk!

Freddy’s Bar in Park Slope is hosting a doggie fashion show on July 18, where hip hounds will compete for prizes in a four-legged walk off. Canine clothing is encouraged but not mandatory, said the organizer.

O’Finn created the show in memory of his pit-bull mix Xena, who was as an institution at the watering hole.

“She was very much a part of the bar,” said O’Finn. “She’d sit on the bar stool and put her paws up — people would put sunglasses on her.”

The winner of the contest will receive a custom trophy named for Xena, and a gift card to Petland Discounts. All dogs that enter will leave with treats, such as bowls, flying discs, and chew toys.

The show is part of Summer Strolls — a series of six block parties in Park Slope — and will also feature karate demonstrations, vintage cars, crafts, and live performances. Before and after the doggie showdown, contortionists and fire performers from the Gowanus Circus will mingle with the crowd, while the Jug Addicts jug band plays live tunes.

Reach reporter Vanessa Ogle at vogle@cnglocal.com or by calling (718) 260-4507. Follow her attwitter.com/oglevanessa.