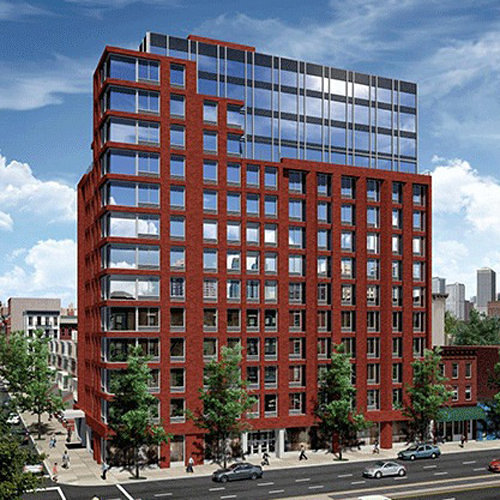 The 12-story rental building Adam America is bringing to 470 4th Avenue at the Gowanus/Park Slope border has a new look. The new renderings from Aufgang Architects first spotted by YIMBY show a slightly less angular version of the 84,454-square-foot building between 10th and 11th streets. The 105-apartment building will have parking for 36 cars and 53 bicycles, a gym, tenant storage, community space, and ground floor retail.

The brick surface, which is solid as it recedes from the avenue, becomes spottier and more immaterial along the avenue itself. In some places, as though embracing the arbitrariness of the deconstructivist idiom, the brick seems to lie flat against the curtainwall, while at other points its protrudes from it, creating an almost old-fashioned effect of punched windows. Over all, the building promises to be well-proportioned and well-made.

Foundation work on the site is set to begin soon, and the building is expected in early 2016.
· New Look: 470 Fourth Avenue YIMBY
· New Park Slope Rental Will Dwarf Its Neighbors Curbed
· All 470 4th Avenue coverage Curbed