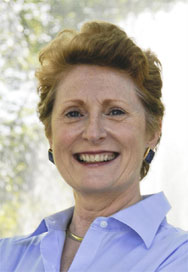 As expected, Thursday’s “Java with Jo Anne” event, with State Assembly Member Jo Anne Simon at One Girl Cookies in DUMBO, drew a number of Brooklyn Heights residents eager to question Ms. Simon’s stance concerning the City Department of Transportation’s plan to construct a temporary six lane highway in the present location of the Brooklyn Heights Promenade. Simon was booed and heckled at the rally on the Promenade last Saturday for not declaring herself opposed to the DOT plan. As Mary Frost reports in the Eagle, when asked why she hadn’t opposed it as other elected officials had, Simon replied that unlike those who had spoken against the DOT plan at the promenade rally — she didn’t name them, but they are City Comptroller Scott Stringer and Brooklyn Borough President Eric Adams — she isn’t running for Mayor. (Another elected official who spoke against the DOT plan on Saturday, Assembly Member Latrice Walker, is running for City Public Advocate.)

Simon noted that there are only two plans now under consideration: the “innovative” plan to build a temporary highway at the level of the Promenade, and a “traditional” lane-by-lane approach that would involve partially closing the BQE, would take longer, and is projected to cause seven mile long traffic jams and cause diversion of much traffic to local streets. The “traditional” approach would affect constituents of hers in Cobble Hill, where she lives. The “innovative” approach would be a benefit to residents of DUMBO and Vinegar Hill, because it would allow traffic to flow freely to the Brooklyn and Manhattan bridges from the BQE, rather than being routed through their neighborhoods. The Eagle story quotes Simon: “We’re in a state of equipoise here. Both plans suck. And they suck a little differently for different people.”

Asked about the alternative plan proposed by the Brooklyn Heights Association that would route the temporary highway below the Promenade, and above the sound attenuating berms and parking lot of Brooklyn Bridge Park, the Eagle story quotes Simon as saying “the DOT Commissioner Polly Trottenberg was very intrigued by it” but that the Department must determine if it is feasible. Simon also noted that it could adversely affect residents of 360 Furman Street, the Pierhouse, and Pier Six (presumably meaning the soon to be completed high rises on the Pier Six uplands).

Simon also noted that it was impossible to evaluate the impacts of the proposals until an environmental assessment has been completed. According to the Eagle:

Her office will be helping to advise people working on statements for input into the environmental review process — a process she is familiar with based on many years of involvement with the Gowanus Expressway and Atlantic Yards processes.

She said that the environmental report, when released, would be very long, and deal with a number of topics. She suggested that neighborhood groups should appoint people with expertise in various areas to analyze and criticize portions of the report. She also encouraged people from different neighborhoods that might be differently affected to get together and discuss how they could find common ground.

Several attendees asked about actions that could reduce the traffic using the BQE, and thereby mitigate the possibility of traffic jams and diversions of traffic. Simon said that eliminating the outbound toll on the Verrazano Bridge would require federal legislation. Congestion pricing, which would require action by the state, is a tough sell, because legislators representing districts in the farther reaches of Brooklyn and Queens, and Nassau County have all been told by their constituents that they oppose anything that would constrain their right to commute to Manhattan by car. Simon added that surveys have shown that people living in these areas rarely if ever use their private cars to go to Manhattan. Nevertheless, they object to anything that would limit their freedom to do so. Simon said she’s convinced that “there’s a direct connection between the steering column and the male groin.” In any event, she didn’t think that congestion pricing would have a significant effect on BQE traffic.

Simon expressed disappointment over the failures of the city and the state to take earlier action on the deterioration of the cantilevered portion of the BQE. She said several successive City DOT commissioners had “kicked the can down the road.” She also reiterated her criticism of the state, expressed at the rally last Saturday, for turning its back on the issue, but added, as the Eagle story reports:

There was some discussion of matters unrelated to the BQE. Simon said that Democratic control of the Senate, along with the assembly and the Executive, meant that progress had been made on several fronts: voting rights, campaign finance reform, LGBTQ rights, and gun safety. She was asked if taxes accruing from marijuana legalization, if passed, might be used to improve public transit. She said there were several proposals for the use of those funds, including repairing the lives of those who had been imprisoned because of marijuana convictions.