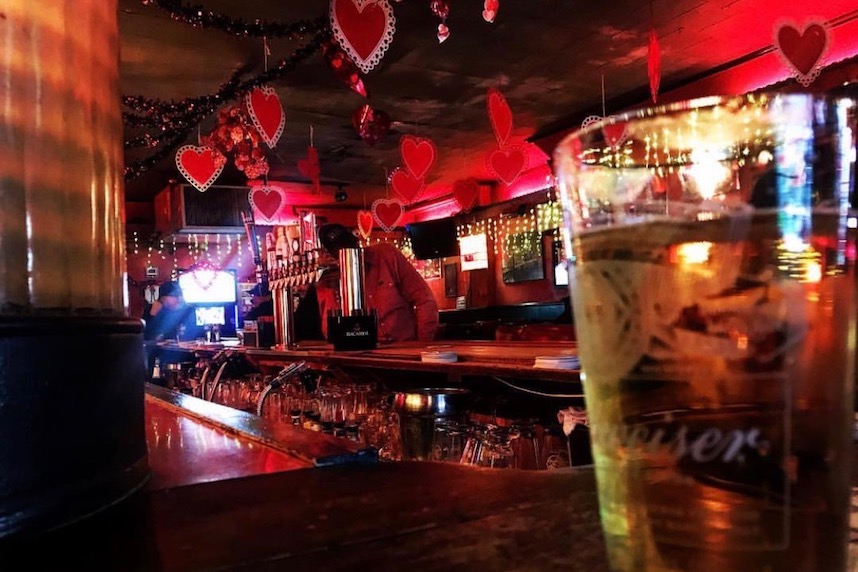 It’s always been happy hour at Rosemary’s Greenpoint Tavern, a warm and welcoming Williamsburg hole-in-the-wall that has stood defiantly unchanged for decades amid Bedford Avenue’s rapid gentrification, its neon sign signaling a refuge from the corporate franchising that has swallowed the neighborhood’s busiest street.

But in a few weeks the lights will go out at the Greenpoint Tavern. Its namesake owner, Rosemary Bleday, has worked behind the bar since her parents opened the tavern in 1955. Now 86, a bartender last night told us that Rosemary has opted to retire from her regular perch as the watering hole is being drowned out by the noise and mess of construction on all sides. A patron also told us separately that her children have opted to sell the bar. We were unable to confirm either with Rosemary herself, who is currently in the hospital, or her family.

Sadly, whatever the exact reason, Rosemary’s Greenpoint Tavern will close its doors on February 28, meaning that its annual St. Patrick’s Day party, where Rosemary is known to hand out free shots to loyal customers, will not happen again. For now, the bar is decked out from top to bottom for Valentine’s Day, as it is for every holiday. (“People call us the holiday inn,” Rosemary said in this 2015 interview). While the doors are still open, expect regulars and curious hipsters alike to be filling the red leather barstools and booths for the final days of a neighborhood standby that has welcomed locals old and new since long before an Apple meant anything but a whole food.

Once famous for serving $3 beer in giant, 32-ounce styrofoam cups—until such a delivery method was banned in New York City—Rosemary’s Greenpoint Tavern still by far offers the buzziest bang for your buck within stumbling distance of the Bedford L train, with busy, friendly bartenders pouring $4 Budweisers and $6 Stellas or Goose Island IPA. The beers often sit before empty chairs, as this is a bar where patrons can always be found outside chatting over cigarettes.

Rosemary’s has forever been cash only, and even a mixed drink with top-shelf liquor will cost you less than $10. A few years ago, Rosemary told Bedford and Bowery that she didn’t like the idea of having an ATM machine inside the bar. But she must have had a change of heart, as a cash machine now stands near the entrance, past the brown-and-white striped awning whose absence will be painfully felt as one of Williamsburg’s last old-school institutions gives way to an unwelcome new strip-mall sensibility along Bedford Avenue.

As sorry as we are to see it go, we’re glad there’s still time to pay our respects to Rosemary’s Greenpoint Tavern while the beer is still flowing. Next time you climb out of the Bedford L, pop over for a nostalgic toast to a Williamsburg of yesteryear, no matter what time of day: The bar opens every day at 11am and stays open til 4. Still, this is not the place for a belligerent bender: “If you’re gonna behave badly, you will be kicked out,” Rosemary told Bedford and Bowery. “And I’ll do the kicking!”