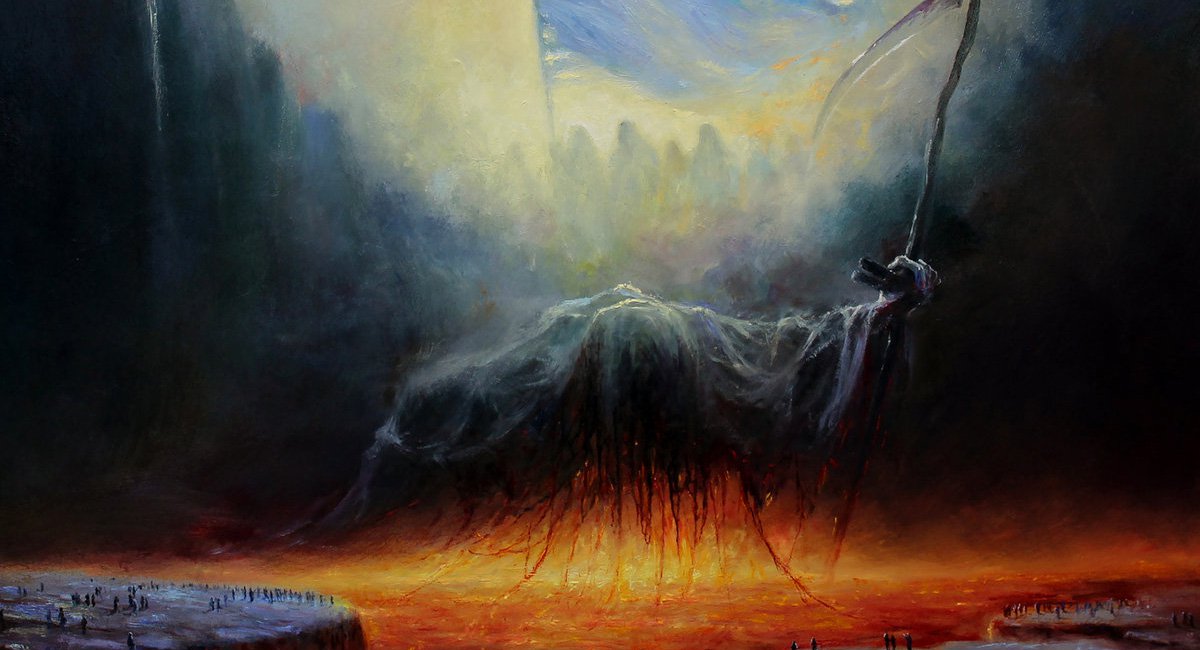 Off the next two weeks to track vox for something new (metal!) and wedding duty (not metal!), so sip this one slow.

WHAT TO HEAR: Leading the way this week is Portent (Gilead Media), the cauterizing new full-length from middle west black metal collective False. Comprised of four hypercoaster epics, Portent is Six Flags for sad kids, with False operating, as they always have, at the intersection of breakneck and bucolic. There are lovely, epic movements bisected by katana riffage and soaring melodies obliterated by runaway blast beats. There are tortured screams and an undercurrent of tragedy to power them. In other words, it’s everything USBM promises to be on paper made whole, so make sure to lend it your ears and, better yet, your wallet.

On the lighter side of the the ol’ emotional spectrum meanwhile are sunkissed sludge rockers Torche and their first LP since 2015, Admission (Relapse). Torche are modern metal’s de-facto boys of summer, laying down contemporary reimaginings of dad drinking tunes like “Mississippi Queen” (see “Slide”) and bleary sunset nostalgia (the title track) with equal aplomb. If you loved Torche before, you’re going to love them just as much as ever, which is high praise this week in light of…

…Batushka! The Polish black metal entity best known for gothic costuming that makes Ghost like Teletubbies has had a rocky road following the release of 2015’s widely revered Litourgiya. Original guitarist (and allegedly the sole creative force behind that record) Krzysztof Drabikowski, left the band and a bitter war over the rights to the name “Batushka” ensued, with the remaining members ultimately retaining the moniker and Metal Blade contract. Following in the footsteps of Drabikowski’s “spiritual successor” to Litourgiya, Панихид, Batushka return today with their first post-split release, Hospodi (Metal Blade). And while it’s necessary to know the context to understand record, it’s probably best to forget it and appreciate the album for what it truly is: Cromulent old world black metal that probably could have been so much more. Stop me if you’ve heard that one before.

Anywayyys, if you’re just here to get your skull caved in, look no further than The Decaying Light (Unique Leader) the impossibly tight new serving of slam from Aussie pain junkies Disentomb. Cut that one with Cold Curse’s Violent Measure (Creator-Destructor Records)—four songs of crusty California crossover—and you’ll be walking on the ceilings in no time.

WHAT TO SEE: If you thought that was good, just wait until you see the shows, which start tonight with Usurper at Vitus, Offensive Threat at El Sabor Norteno, Misery Loves Company at Lucky 13 Saloon, Elefantkiller at Gutter Bar, Anaka at Brooklyn Bazaar, Cast in Blood at Amityville Music Hall, and Ratt at Bergen Performing Arts Center. After that, Saturday fires up with Terrorpalooza 2019 at Revolution, Blame God at The Broadway, Tension at Amityville Music Hall, and Cherubs at Saint Vitus, followed on Sunday by Sanctuary performing Refuge Denied (also at Vitus), Darkside/The Last Stand at Niagara, Cannabis Corpse at Blackthorn 51, and Daddy Long Legs at Brooklyn Bazaar.

The working week trudges back around on Monday with respite provided by Wolves at the Gate at The Kingsland and Juan Bond at Vitus, while Tuesday welcomes, um, noted Motley Crue fanatic Chuck Klosterman to the Greenpoint hell hole. Wednesday brings ya She Past Away at Brooklyn Bazaar and Fluoride at Vitus, before Thursday issues its weekly death rattle with Lesser Glow at The Kingsland.

WHAT THE FUCK: Original Misfits. MSG. Halloween. These tickets are going to be stupid fucking expensive aren’t they?

The post This One Goes to Eleven: Weekly metal round up appeared first on Free Williamsburg.