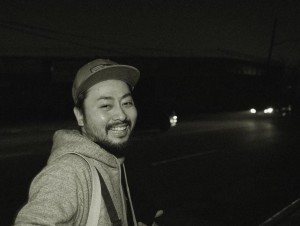 A new mural has appeared in the Tasting Room thanks to the hard work of local artist Masaya Nakayama. The latest artist to leave their mark on our western wall, Masaya got his start in Japan where he graduated from Osaka University of Arts before working as a public junior high school art teacher.

The mural in progress.

In 2012 he moved to the US and set up his base of operations right here in Brooklyn. Since then he’s been a whirlwind of activity, frequently travelling to Japan and overseas to present works at galleries and museums the world over. Masaya is also actively engaged in educational activities such as nursery art design and holding workshops for children and adults.

He’s also part of the Coperus, a Japanese artist collective based in New York and Tokyo. The group formed in 2018 when the four artists— a painter, an illustrator, a photographer, and a hair stylist— came together due to their care for the children of the world. Using their different forms of art, these four artists face and fight modern day problems head on in hopes of leaving a brighter future for the next generation.

This mural is from a series of my recent works that dig up and re-examine things in the process of being buried in our perception. In this instance I used not only our casual daily scenery but also some issues we have as motifs. I am glad that Brooklyn Brewery and I see eye to eye in our vision of a sustainable society. We both think energy and environmental problems are some of the important global subjects that our generation is facing, which is why you can see Ms. Greta Thunberg in my painting. For others, we are hoping for a world of equality and fairness, without any discrimination. We just want to create a bright future. I hope that this mural becomes a reason to think together in this hurried world.

At first glance, my mural looks like a white line is drawn on top of the painting, but in reality, the line is created by carefully leaving “white” from the original wall canvas. Using this technique, I try uncovering the meaning of a piece of information, picture, or encounter, and make an attempt to digest “things as they really are” on my own. The act is what’s being conveyed.

Join us in the Tasting Room on Wednesday, December 11 for the Official Premiere of Masaya’s mural, featuring some of his additional work for viewing.

If you dig Masaya’s work, follow him on Instagram at @msynkyma, visit his official website here, and stop by the Company Store to pick up a limited run t-shirt he designed for us. But don’t wait too long–it’s only a matter of time until another artist takes over the mural to leave their mark on the Tasting Room.