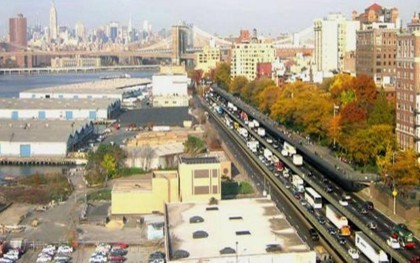 The Wall Street Journal reports that unidentified members of the panel appointed by Mayor de Blasio have said data from sensors indicates the cantievered section of the Brooklyn-Queens Expressway under brooklyn Heights is in worse shape than prevously believed. Some panel members have indicated that trucks over a certain weight may have to be banned from this part of the BQE as soon as next year, and that repair work, meant only to stabilize the highway and to allow the city time to design a solution that would not simply replace the cantilever but do something different with the highway, may have to start in 2021. That work would likely entail night and weekend closures, or possibly a full closure for some stretch of time, of the cantilevered section. This raises the question of where traffic will go, both the heavy truck traffic that may be banned next year and all the remaining traffic during times of closure.

The Journal contacted the panel’s chair, Carl Scissura, who would not comment beyond saying that the panel’s report should be published in January. A spokesman for Mayor de Blasio said the Mayor’s office “will review the external panel’s report when it is complete.”

The Journal story also quotes Hilary Jager, co-founder of A Better Way, as saying Brooklyn Heights residents know “that whatever the city decides to do, they will have to suffer through years of heavy construction work.” She added that “it would be worth it if the city sets its sights on a more transformative highway project that is better for residents as well as for drivers.”

As for the feasibility of such a “transformative project”, there’s much in the Journal story about that. Click on the link to read.

In a related story, Mary Frost reports in the Eagle that some neighbors are opposing a proposal to re-zone a block on Old Fulton Street, in the Fulton Ferry area, to allow construction of a high rise building. Their opposition is based, in part, on the possibility that such a building could interfere with city plans to relocate the BQE. The Eagle story notes that the Executive Committee of Brooklyn Community Board 2, unanimously voted to accept the recommendation of its Land Use Committee to recommend that the re-zoning application not be approved.