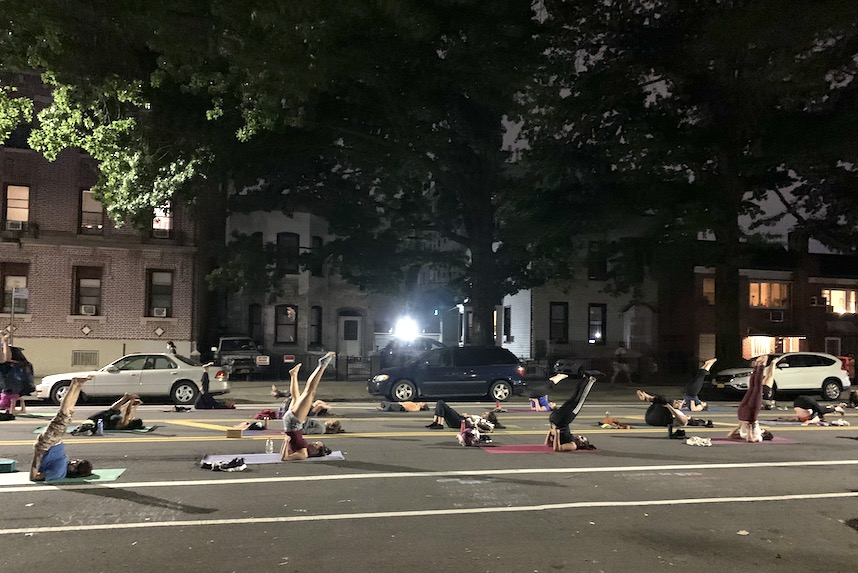 A nighttime street yoga session in Astoria this week was a reminder that nothing can break this city. Photo: Kate Hooker

Nineteen years ago today I was just a kid entering my second year of grad school at NYU. I’d returned from a summer internship in India that involved fieldwork in Gujarat, which had recently been ravaged by a deadly earthquake, and I remember feeling grateful to be able to come home to a place where things like that didn’t happen, where the concept of mourning thousands lost in one day was as foreign as monsoon season and a chai wallah materializing at my office every day. Just a day or two earlier, I’d moved a laundry basket of clothes into a Craigslist sublet with a random roommate on 10th and A, and I was ready to get to the business of giving equal weight to my coursework and patronizing various dive bars and cafes around the East Village for powwows with friends that felt critically important and stretched luxuriously from an hour to an entire day, when time was an infinite resource and no one I knew ever wore me out or bored me. And then, in the space of one catastrophic morning, everything I thought I knew became unrecognizable.

My 9/11 story isn’t notable in any way, but I’m amazed how with each passing anniversary of that disastrous day, what I did and the way I felt in that brief period of time suspended beforehand seem increasingly impossible. I’m sure part of it is just a function of my age, but the nearly two decades that followed seem to have been immeasurably shaped by what happened on that macabrely sunny day in September. The attacks sowed the seeds for the ensuing xenophobia and white supremacy and the lack of empathy it wrought, the wars for profit, the rise of Fox News and the Tea Party, the willingness to accept lies and eventually outright fraud and lawlessness from elected politicians, the tendency to ignore facts and science when they aren’t on our side, and the situation we now find ourselves in, with a virus that has so far killed 60 times more Americans than 9/11 did and has gutted entire sectors of our economy. I know that everything doesn’t revolve around NYC (just ask your friends in NorCal right now), but the fact is that this city bore the brunt of both the 9/11 attacks and the scariest time of COVID. We were, literally, the site of ground zero twice, and in both instances New Yorkers handled it with uncommon grace, resourcefulness, kindness, and resolve. Every year on this day, I read Colson Whitehead’s gorgeous ode to our city and find it has a new and different resonance each time, and this year it struck me as especially poignant. I also read this new piece in The Atlantic, which makes the case that we desperately need to find some semblance of unity again.

Nonetheless, even as city museums continue to open this week and restaurants prepare for limited-capacity indoor dining at the end of the month, there’s still a sense that in-person activities in confined spaces are still a bridge too far for many of us. There are, however, plenty of outdoor and virtual events of interest happening this weekend. I’m planning to explore Community Spread, a new open-air art crawl in Lower Manhattan that was previewed by our own Regina Bresler earlier this week, and I’m certainly intrigued by the sound of A Night of Too Many Cages, a live-streamed fundraiser for Artists Striving to End Poverty happening on Saturday and featuring comedian Chris Gethard and an array of Nic Cage impersonators. The annual Pig Island festival, a porcine-focused bbq event that traditionally draws a formidable roster of guest pitmasters, is back this Saturday, in a more pandemic-appropriate format, at its new location in Snug Harbor. To celebrate its reopening, the Brooklyn Museum is throwing an outdoor party the same afternoon, featuring a steel pan concert, DJ sets, food vendors, and sidewalk chalk drawing, and the New York Bike Jumble, a flea market for serious and not-so-serious cyclists alike, is back at the Old Stone House in Park Slope if you’re getting tired of trolling Craigslist. Maybe, though, you’d rather relax in the courtyard at Industry City, where there will be oysters, live music, and petanque available all weekend. Once the week gets underway, The Moth is streaming a special show of stories about “close encounters” live from Green-Wood Cemetery. And the New Yorker Festival is going virtual this year as well—a $50 ticket gets you a nearly all-access pass to an amazing slate of events with speakers like AOC, Dr. Fauci, Margaret Atwood, Chris Rock, Ira Glass, Yo-Yo Ma, Natasha Lyonne, Fiona Apple, Jelani Cobb, and more.

Check out those events if any appeal, or just hole up and listen to a podcast from Neil Strauss about an insanely twisty missing person case he got himself entangled in called To Live and Die In LA, which is what I’ve been up to this week. A few nights ago, I met a friend for a socially-distant drink in Astoria and happened upon a late-night street yoga class that made me smile and reminded me, once again, that nothing can break this town and its boundless energy. Hang in there today, all, and I for one will be overwhelmed with gratitude for the remarkable and resilient city I call home.