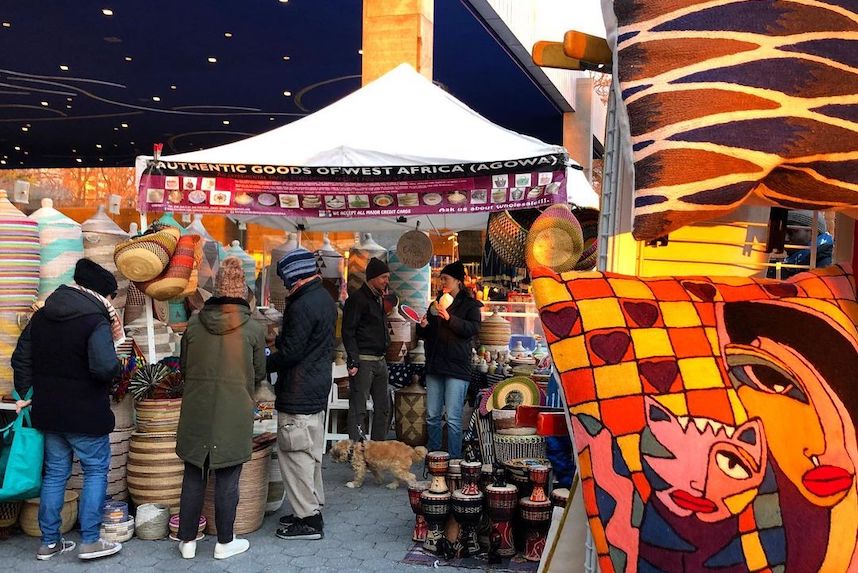 The curated vendors of Brooklyn Pop-Up are appearing at a few holiday markets this weekend, including the holiday fair at Lakeside. Photo: @brooklyn.pop.up

Happy Friday Brooklyn babies, in this, one of the final weeks of 2020, a year whose motto should officially be “If the virus doesn’t get you, the debilitating anxiety and/or boredom will.” I’m fresh off a decisive win in my office’s virtual team trivia event last night, the sun is out, and I just polished off a slice of pizza leftover from an Emily order for breakfast, so basically everything is coming up roses at this particular moment in time, but that probably has more to do with the fact that I’ve avoided the endless onslaught of bad news and the grim numbers so far this morning and went straight to cuddling with my dog on the couch. It feels like there is not enough time in the day right now, which is usually the case in December, but it feels off this year because, well, I don’t leave my apartment, and the time I used to reserve for making life-affirming connections with other human beings has been reallocated to obsessively revisiting virtual shopping carts filled with criminally overpriced sweatpants across the Internet and avoiding Trump tweets at all costs.

I’m going to try to do something about that this weekend, and already have a holiday cookie exchange booked with some friends in Fort Greene Park on Sunday—anyone have a particularly winning recipe they’d like to send along? There is a movement afoot in my neighborhood’s Nextdoor to get as many people as possible to put up lights and decorations in this time when we all need some extra cheer, so I hope to contribute to that effort tomorrow. We might not ever reach Dyker Heights status, but we can try! And speaking of Dyker Heights, a drive down there some evening this week isn’t the worst idea if you’re feeling Grinchy and want to snap out of it. There is an array of holiday markets happening around town this weekend, including at the City Reliquary, The Old Stone House, Parklife, and the Gowanus Textile Arts Center, and if you don’t want to leave the house you can order presents for the people on your list from local Brooklyn businesses via this ingenious site. Starting this Wednesday evening, Brooklyn Bridge Park is the site of a new Creative Time outdoor film installation called Waters of a Lower Register, and the one and only David Sedaris will be providing some much needed comic relief next Friday at an in-person signing of his new book, The Best of Me, at Powerhouse’s recently opened Industry City outpost.

Truth be told, though, even as the hopeful vaccine news takes root, the numbers aren’t going in any good direction right now. These next few weeks—normally an intoxicating, frenetic cacophony of parties and booze and late-night carousing for many of us—are going to be spent indoors and isolated, riding out the clock while we await inoculation. I bought a vintage Singer sewing machine off of Craigslist earlier this week (from a BB reader, which was a nice surprise) and plan to get down to business with it, and I might check out a livestream performance of pen/man/ship, a new play produced by Moliere in the Park, tomorrow. Alison Roman is hosting an online baking class in late January, which I’m considering signing up for before it sells out, and I’m having fun sifting through the annual slew of “Best Of” lists, including our own Best Books of 2020, to see if I can catch up on all that I’ve missed.

My pandemic cellmate and I tore through HBO’s Heaven’s Gate documentary earlier this week and have been discussing it ad nauseam ever since—if you have any interest in cults it’s a must-watch, if only because that story is way more interesting and nuanced than I remember the contemporaneous news coverage of it being. We’re also two episodes into How To With John Wilson, which I’m finding to be absolutely hilarious, complete with actual LOLs, although my new-found after-dinner whisky habit might have more to do with that than anything else. I received a wonderful package this week from family on the West Coast whom I miss tremendously and it contained, among other things, this apricot chili jam, which when paired with a slice of some aged Manchego that I happened to have in my fridge, has been getting me through when all else fails. Do you all have some seemingly small, insignificant thing like that to treat yourself to in order to get by these days? If so, let me know, I’d love to share that info out next week so we can all benefit from your happy discoveries.

Otherwise, best wishes to all for a Happy Hanukkah and a fun (but more importantly, safe and healthy) weekend! Keep those masks up, everyone, and thanks for all you do to support our inimitable borough and keep each other safe as we plod on towards that growing circle of light at the end of this impossibly long tunnel.