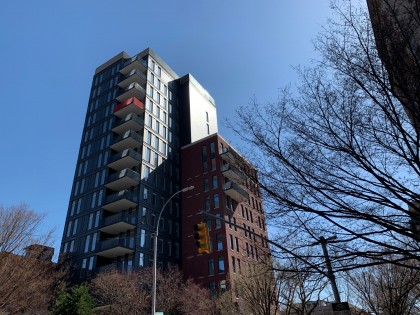 Update:Curbed interviews an acoustician who suggests some possible solutions. Big hat tip to reader Remsen Street Dweller for alerting us to Mary Frost’s Eagle story about 347 Henry Street, or 5 River Park (photo by your correspondent), a nearly completed high rise residential building two blocks south of Atlantic Avenue in Cobble Hill, that is “driving neighbors crazy with its ‘screeching noises’ at all hours.” According to Brownstoner the sound has been heard “as far north as Joralemon Street in Brooklyn Heights, south to Warren Street, and east to Court Street, according to residents.”

The sound is particularly noticeable during periods of high wind, of which we’ve had plenty lately. This brought to your correspondent’s mind the case of the Tacoma Narrows Bridge, in Washington State, that during its short life was also susceptible to wind. The tendency of its roadway to buckle up and down in a twisting motion in even moderately brisk winds led to the nickname “Galloping Gertie.” Only a few months after it had been opened to traffic, its roadway severed and collapsed. Fortunately there were few cars on the bridge when this happened, and all of their human occupants escaped. Sadly, the one casualty was Tubby, a Cocker Spaniel, who defied efforts to free him from a doomed car.

I’m thinking, there should be a name for 347 Henry along the lines of “Galloping Gertie.” Something like “Shreiking Susie.” Does it have to be a woman’s name? Of course not. How about “Screeching Scott”? Well, that might be taken as an unfair comment on a mayoral candidate.

Surely you, our readers, can give better suggestions.