"Things move on, time passes, people go away, and has added a photo to the pool: 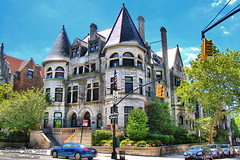 It’s actually two houses. The right side, where all of the really impressive stuff is located, belonged to financier Henry Hulbert. The smaller side on the left was the home of his daughter, Susie, and her husband, Joseph Sutphin, a partner in H. C. Hulbert & Co.
The whole structure, now the Poly Prep Lower School, was architect Montrose Morris‘ largest private house to date. It was commissioned when he was at the height of his Romanesque Revival period and busting out as one of only several go-to Brooklyn architects of the uber rich. While this house was going up in 1889, he was also building the Alhambra Apartments in Bed Stuy as well as the row houses on his home block on Hancock Street.
The house was almost alone here on Prospect Park West, which was called 9th Avenue back then, and it must have looked like a gleaming chateau on the edge of the park. Almost all Romanesque Revival buildings are built in dark brick and brownstone, such as the fabulous C. P. H. Gilbert house for Thomas Adams Jr. at 119 8th Avenue, this house’s only real stylistic rival in the Slope. Morris chose limestone for the Hulbert House facade, predating the White Cities trend by several years.
by Suzanne Spellen
——————————-

Poly Prep Country Day School was founded 163 years ago in 1854 in Downtown Brooklyn as The Polytechnic Institute. It was one of the first private boys’ schools in the city of Brooklyn. The initial aim of the school was to offer an academic program similar to that of boarding schools of the time while striving to maintain a strong community feel among students and faculty alike.