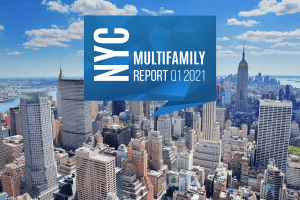 While 2020 was a year of massive change throughout the real estate industry, for the NYC multifamily sector, the downturn brought on by the pandemic was just another hit to an already cooled-down market.

To put that figure into sharp context, Manhattan alone closed $3.61 billion in multifamily sales in 2019 — even during weakened market conditions. What’s more, the extreme slowdown of NYC’s multifamily sector is even more evident when considering monthly volumes, which have not surpassed $360 million since March of last year.

The hits taken in 2020 were especially painful for NYC’s multifamily landscape when comparing it to Q1 2020, which initially hinted at a possible recovery. Q1 2020’s $1.76 billion sales volume represented a 28% Y-o-Y increase, although sales activity was still trending down, with its 197 deals marking a 9% Y-o-Y drop. But, by Q2 2020, sales activity had slowed to a mere 96 transactions for a 51% Y-o-Y drop.

Now, a year later, Q1 2020 remains the strongest quarter by far in terms of sales — despite its contracting activity. In fact, Q1 2021 marked the ninth consecutive quarter in which sales activity contracted year-over-year. Specifically, Q1 2021 was down 20% Y-o-Y, closing 157 multifamily deals that comprised 169 buildings.

The Manhattan multifamily market — usually the hottest of the four boroughs — was hit the hardest by the pandemic. Here, the number of sales in Q1 2021 was down 25% Y-o-Y, with 39 deals closed in the first three months of the year as opposed to 52 during the same time period last year.

That sharp drop in transactional activity was also starkly evident in Manhattan’s Q1 sales volume, which came in at a mere $277 million — 70% less than during the same period last year. Unsurprisingly, the average price per unit was also on the decline, contracting 22% Y-o-Y to close Q1 2021 at $446,451. The only positive change in multifamily indicators was observed in the borough’s average price per square foot, which ticked up 4% Y-o-Y to $634/sq. ft.

However, one aspect of the NYC multifamily market remained unchanged: Yet again, Manhattan was the location of the city’s top multifamily deal — even if the $22,875,000 price tag commanded by the two-building deal at 140 W. 4th St. and 142 W. 4th St. was a far cry from the borough’s typically much-pricier multifamily sales. Manhattan’s second- and third-most expensive deals were the $21.5 million sale of 63 W. 104th St. and the $18.1 million 1414 York Ave. Notably, these were also the third- and fourth-priciest deals recorded in NYC in Q1.

Brooklyn Prices Trend Down Across the Board, Average Price Per Unit Contracts $103K Y-o-Y

Brooklyn claimed some of the most expensive deals in the city, as well, with the $22.48 million sale of 689 Marcy Ave. and the $15 million sale of 70 Prospect Park W. ranking not only as the borough’s top two deals, but also as the second- and fifth-priciest in the city overall. Brooklyn’s top three was rounded out by the $8.6 million sale of 441 1st St., an eight-unit building in Park Slope.

Specifically, Brooklyn saw 72 deals close in Q1 2021, just 14% less than in Q1 2020. Included in those sales were 78 buildings — only 10% fewer than in early 2020. However, the properties traded during the first three months of this year comprised 836 units as opposed to the 1,222 that changed hands in early 2020, resulting in a 32% Y-o-Y drop in the number of multifamily units traded in Brooklyn.

The Queens multifamily market fared somewhat better under the pandemic’s sustained pressure, closing 30 sales in Q1 2021 — just 9% fewer than in Q1 2020. However, multifamily deals targeted fewer buildings and fewer units during the first three months of this year than during the same timeframe last year. To be precise, 32 properties comprising 422 units changed hands here in Q1 2021, resulting in a 30% Y-o-Y drop in the number of buildings sold and a 32% Y-o-Y drop in the borough’s unit volume.

Pricing trends were on a downward slope here, too, with the average price per unit stabilizing at $210,755 — 19% lower than in Q1 2020 for a difference a of $50,000 per unit. Contracting 16% Y-o-Y, Queens’ average price per square foot closed Q1 at $271, a significant departure from the $400 per square foot that it commanded back in Q1 2019. Declining pricing trends, paired with the slowdown in sales activity, pulled the borough’s sales volume down 40% Y-o-Y — a significant contraction that, nevertheless, was the least-sharpest rate of decline among the four boroughs.

Pricing remained more stable in the Bronx, with the average price per square foot here declining just 3% Y-o-Y to hit $170. Likewise, the average price per unit ticked up 1% Y-o-Y, going from $154,999 in Q1 2020 to $156,112 in the first quarter of this year. But, transactional activity was nearly halved: The Bronx registered only 16 multifamily deals in Q1 of this year — 43% fewer than during the same time period last year.

Furthermore, those 16 deals comprised 16 buildings — 45% fewer than in Q1 2020. Here, too, investors seemed to have reoriented toward smaller properties, with the borough’s Q1 unit volume totaling a mere 329 units — 60% fewer than the same period last year. Along the same lines, the three most expensive multifamily sales in the Bronx totaled 143 units at the start of this year, as opposed to the 210 units that comprised the borough’s three priciest sales in Q1 2020.

For this Q1 2021 multifamily snapshot, we considered all multifamily building sales registered through deeds between January 1 and March 31 in 2017, 2018, 2019, 2020 and 2021, in the boroughs of Manhattan, Brooklyn, Queens and the Bronx. All sales were counted for the month they were registered in.

All deals between related parties were excluded, and all deals included in our report were verified to be arm’s-length transactions. Properties with fewer than five units were also excluded, as were deals with sale prices less than $100,000.