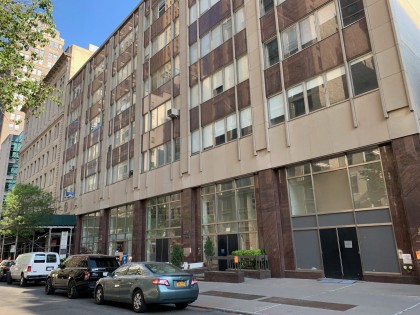 The Brooklyn Daily Eagle reports that St. Francis College, a four year liberal arts institution that has made its home in Brooklyn Heights since 1963, will be moving to new, smaller quarters in a high rise building being built above the Macy’s store on Fulton Street in Downtown Brooklyn. Although St. Francis plans to expand its student population from its present 2,700 or so to 3,500 by 2026, the Eagle story quotes a representative of the school as saying that while the present building at 180 Remsen Street (photo by C. Scales for BHB) wasn’t “designed specifically to be a campus” the new space is, and therefore will use its square footage more efficiently.

The Eagle quotes “officials” as saying the new “space will include a 6,600-square-foot library, a 300 seat auditorium, a cafeteria, two art gallery spaces, and plenty of outdoor space, with a terrace and rooftop.” It’s interesting that there’s no mention of athletic facilities. St. Francis fields intercollegiate teams in a number of sports, including basketball, soccer, volleyball, water polo, diving, and swimming. While the soccer team has done its practice on the fields at Brooklyn Bridge Park, other sports have used the ample indoor facilities at the Generoso Pope Athletic Complex, which is part of the same 180 Remsen building which will presumably be sold to a developer to be demolished, no doubt for high rise (the building is outside the Brooklyn Heights Historic District) luxury apartments. Update: SFC Athletic Director Irma Garcia provides this information:

Because our new Wheeler building campus does not have a gymnasium or pool on site, we are making special plans for indoor teams that rely on those facilities, including aquatics, basketball and volleyball.

SFC will partner with nearby educational institutions, to use their indoor facilities in the short term after our move. SFC is developing a permanent solution for its indoor sports and other athletics facilities longer term. More information will be announced soon.

What will we Heights residents be losing because of this? An auditorium with ample space for neighborhood meetings and for cultural events, a lobby with inviting and interesting art exhibits, and a swimming pool available for community use during limited hours. Oh, yes, and for many of us, a place to vote.