Benoît Lahaye is probably the best grower/producer in Bouzy right now. I use “probably” because I haven’t sat down recently with a bottle of Champagne by Camille Savés or Paul Bara. But I feel pretty confident on this one. Lahaye is making excellent wines, mostly of Pinot Noir from Bouzy.

Lahaye is a smart winemaker, strategically varying in his use of wood for fermentation, using naturally occurring versus selected yeasts, cork or crown capsules for secondary fermentation, presence or absence of malolactic fermentation, and deftly blending wines. There are 8 cuvées, I think, which sounds like a lot for a guy who owns fewer than 5 hectares of land. There’s just not a large supply of any of the wines. He is also ultra-conscientious as a grape farmer. The first paragraph of Peter Liem’s profile of Lahaye on ChampagneGuide.net describes this:

A passionate advocate of natural winegrowing, Benoît Lahaye took over
his family’s estate in 1993 and has been bottling wine under his own
label since 1996. He became interested in natural viticulture early on,
and inspired by Patrick Meyer in Alsace, Lahaye completely stopped using
systemic herbicides in 1994. By 1996 he had begun to work organically,
in addition to using cover crops in the vineyards and experimenting with
biodynamic treatments; the estate was fully converted to organic
viticulture in 2003, and certified organic in 2007. Lahaye has noticed a
pronounced difference in his wines since the transition to organic
farming. “It’s not really a question of being better,” he says, “but my
wines attain higher levels of ripeness now, while retaining the same
level of acidity.”

I first tasted a Lahaye wine on the same day that I first met my good friend Peter – he brought a bottle of the 2002 vintage wine back from France and shared it over dinner in Portland. Since that day I drink the wines at every opportunity. Bottles are not easy to find, but there were always a few places. I used to drink the rosé off the list at Vinegar Hill House when it was something like $55. I could find a bottle here and there at places like Chambers Street and Crush. Peter always told me that a decade from now there are a few Champagne producers who will be widely recognized as superstars, and Lahaye is one of them. buy the wines now, while you can, he said.

I am not an expert with Lahaye wines. But here is my take: like many Champagnes, they show better when they are opened well ahead of drinking them. I’ve never had a mature bottle, so I have no idea how they age. But the young bottles – open them a few hours before you want to drink them, if you can. And if you cannot, consider decanting, although that can change the texture of the wine. Lahaye’s wines generally show great intensity of character, as opposed to opulence or overt richness. The best bottles show vivid and detailed aromas and flavors, and provide hours of interest and deliciousness. I find these to be particularly food-friendly Champagnes, too, working well with a good variety of dishes.

All of that said, I’ve never tasted the lineup of wines in one sitting. I’ve never opened more than one Lahaye bottle at a time – I’ve never done anything with Lahaye wines other than to enjoy them bottle by bottle. Not that there’s anything wrong with that. But I was excited, then, when a few friends agreed that it would be good fun to find as many bottles as we could and to drink them all together, over dinner.

We did this on a recent night and it happened that the weather turned entirely weird, reaching over 60 degrees on a December day, and poured rain in buckets. There are some evenings when the wines show beautifully. This was not one of them, my friends. The wines were fine, but did not show much of the intrigue and beauty that made us fans in the first place. There were things to appreciate and I very much enjoyed them. But some of the folks at the table who had not previously had a lot of Lahaye wine – those folks perhaps think that the rest of us are weird for loving this producer.

Here are the wines we drank, along with some notes (we found everything except for the Brut Nature and the Blanc de Noirs):

Benoît Lahaye Champagne Brut Essential (I’m not sure of the base year here, but I believe it was 2009) – as one might expect, this turned out to the the most accessible of the wines on the table, but hours later as we revisited the wines, it was the one that held up the best on this evening of strange fluctuations in humidity and air pressure. This is a blend of mostly Pinot Noir (85%) and Chardonnay and it is overtly delicious, although less complicated than the other wines on the table. But it is a good example of what Lahaye wines tend to be – ripe but entirely focused, vinous and intense and with a certain purity of expression. 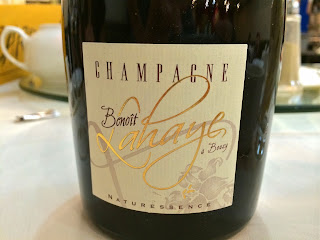 Benoît Lahaye Champagne Naturessense Brut – this is made of equal parts old vines Pinot Noir and Chardonnay, from a blend of vintages. It is unusual in that it is vinified entirely in wood, and on this night the immediate impression of the wine reflected this. It was distinctly woody in the first half an hour, and although there were nice aromas of creamy lemon and stone in there somewhere, I found the wood to be distracting. But then 90 minutes later when I came back to the wine, the wood was much better integrated and the wine showed much better. I enjoyed the merging of the influences of red berry and lemony fruit, creamy richness, and focused minerality here, and I would like to drink this again on another night soon. I’m not convinced that our experience was representative of the wine. 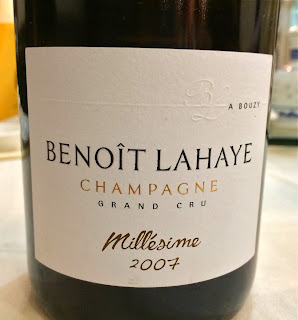 Benoît Lahaye Champagne 2007 Brut – One of the great values in Champagne right now, Lahaye’s vintage wine showed well even on this poor night. This wine is also vinified in barrel, although I find no real wood influence in the wine. It took a while to unfold on this night, and I doubt we experienced it at its best, but I love this wine in general for its deep darkly intense Bouzy fruit, its elegant balance, and its almost vicious minerality. There is a lot of material here and this seems like something to forget about for a while in the cellar. 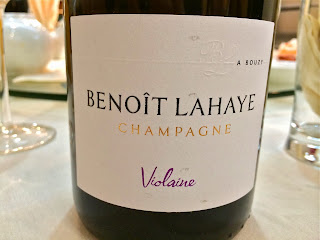 Benoît Lahaye Champagne (2009) Violane Brut Nature – This is the newest of the Lahaye wines,  and this one based on 2009 is the second release. This is a Champagne made without the addition of sulfur. Okay, I’m not a fan of “natural wines” just because they are “natural.” This one, however, is compellingly delicious. It was immediately and entirely apart from the other wines on the table in its fruitiness. Grapey, almost. In a good way. Clean and pure dark fruit really vibrates here, and underneath that, chalk. But on this evening, it didn’t hold up well, and the thread that held the wine together began to come undone. But I know this to be a great wine and I think it just showed very poorly on this night. 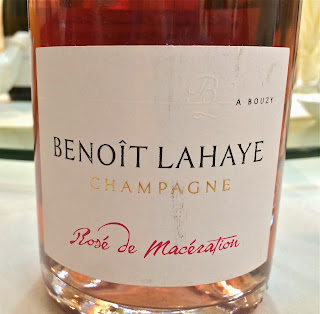 Benoît Lahaye Champagne Brut Rosé de Macération (2009, I think) – Lahaye’s rosé has been available here in NYC for longer than many of his other wines. It seems to be a polarizing wine. I’ve drunk bottles with wine lovers who simply do not enjoy it, and on this recent evening I heard one person say that it has an unpleasant yeasty sense to it. I love the wine, unabashedly. It is made using whole clusters in fermentation. Yup, like some Burgundy producers do, including Dujac and Chandon de Briailles. It is dosed at a very low level – 3 grams here, if this was in fact based on 2009. The wine just doesn’t play like a typical rosé of Champagne. It takes hours to open up after pulling the cork (what would it be like if I left a bottle in the cellar for 10 years?). It is vinous and intense, and I think sometimes it drinks more like a light red wine than a rosé. After an hour or two, I thought our bottle was drinking beautifully. Other folks did not love it the way I did. 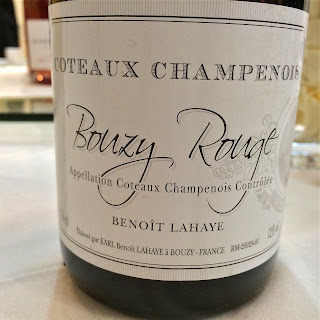 Benoît Lahaye 2007 Coteaux Champenois Bouzy Rouge – One of the great names in wine, Bouzy Rouge. Lahaye’s is considered to be one of the great red wines of Champagne. On this night, this bottle also was somewhat controversial. I am a fan of red wine from Champagne. When well made, it is a special and delicious thing that is uniquely expressive. This bottle was fascinating to me, with aromas that were darkly mineral and savory, and with a sort of primal forest-y sense. The palate, however, felt constricted and a bit simple, and the wine probably needs more time in the cellar in order to show its best, as might be expected with Pinot Noir from good terroir. Five or six is probably not a good age for a wine like this. Go younger or older, I would think. Still, I liked the wine and would be curious to drink it again in another 5 years. Others felt that they would have liked it more if it cost $25. Fair enough, although I think that part of the point of the wine is lost when thinking about it in those terms.

So, that’s it – our evening with Benoît Lahaye’s Champagnes. Although this was not a great night for the wines, I heartily recommend them if you like soil-expressive red grape heavy Champagne.