With its expansive front room and triple-height glass-paned façade, Boerum House & Home on Atlantic Avenue offers a boutique retail experience that is impossible to find in New York. The building, which previously housed a gallery on the ground floor and frame shop above, has been repurposed by Flank, an interdisciplinary design and development firm, as a home-design store and showroom for its 71 Smith Street project around the corner.

Boerum showcases more than 130 design makers working in Brooklyn, throughout the states, and around the world. Flank collaborated with Partners & Spade on branding and interior design, masterminding a store environment that not only acquaints local residents and potential homebuyers with emerging designers but also demonstrates how these creations relate to the spaces they live in.

“It’s a great way to interact with the community and introduce potential buyers of the new condos to makers and vendors that they may not be familiar with, as well as open their eyes to custom options,” says store manager Jesse Johnson. “It’s all about customizing your space and building it.”

Partners & Spade spent several months sourcing every item in the store. The designers inserted a raised platform in the large front area to create a sample living room, delineated by hanging “windows” and furnished with a custom sofa and stools by Uhuru in Brooklyn, rugs sourced from Morocco, and vintage pieces such as Børge Mogensen chairs. “All of our homes show this quality,” Johnson contends. “Not hand-me-downs per se but a mix of vintage pieces, new designers, and items from all around the world.”

Local designer Patrick Townsend custom designed the large brass and wire chandelier for the soaring space, which in the late-1920s began as the display floor for the National Cash Register Association. The Art Deco façade, patterned stone flooring, and balcony railing have all been retained from the building’s inception, and helped to inspire cool tie-ins among the designs.

For example, the striking, multi-paned façade inspired a custom print designed by Partners & Spade that appears on store tissue paper. The same pattern adorns the Fredericks & Mae kites that hang from the ceiling, leather catch-alls by Los Angeles designer Claire Vivier, and ceramic pieces by Pilar Wiley. In this way, rather than bringing together a large quantity of disconnected home objects to sell, Boerum asked designers to participate in the creation of the store itself. The result shows how good design doesn’t exist in a vacuum but instead communicates constantly with its environment.

Visitors will meander from the living room to the “kitchen,” which models appliances and cooking ware as well as innovative designs coming out of the maker movement. Handmade vessels by Suzanne Sullivan and High Gloss (both based in Brooklyn) inhabit kitchen shelves. A second custom fixture by Patrick Townsend—a highly functional chandelier-pot rack combination—offers shoppers an idea they can take back to their own dwellings. 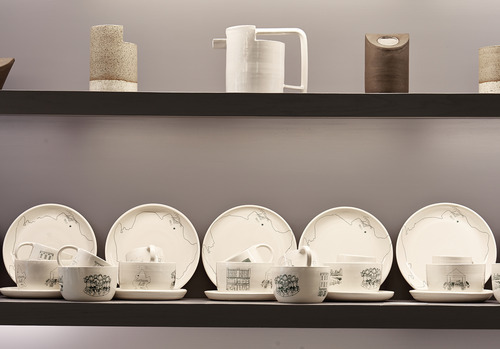 The ceramics on top are by High Gloss. Visitors who spend time in Boerum will begin to notice special tie-ins throughout, such as Emily Johnson illustrations of Brooklyn landmarks that appear on ceramics by Helen Levi as well as on a wall in the children’s room. 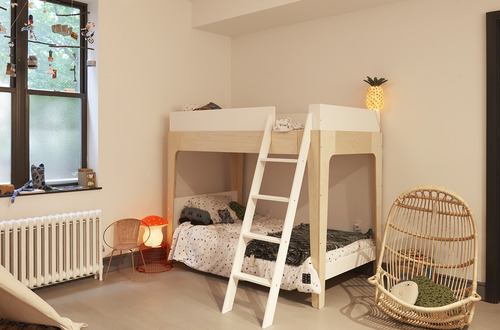 Each “room” in Boerum demonstrates what fine, customized craftsmanship can do to transform a box into a home. All of the millwork in the shop was completed onsite. The bathroom displays custom tile work and countertops that a potential condo buyer might select for her residence. Bath products by local companies such as Prospector Co. complete the experience of stepping into one’s future home environment. The children’s room beyond houses a bunk bed by Oeuf, with bedding by Safe House.

As Johnson says, Boerum is really a first of its kind in retail. In its furnishing of rooms within one retail space, the store could be compared to Ikea. But rather than promoting one Ikea brand, Boerum champions a multitude of independent designers working side by side. It’s this aspect of many different parts fitting together that offers a glimpse into a burgeoning design community and provides an aesthetic that is difficult to say no to.

Chen Chen & Kai Williams made the metamorphic rock bookends that appear in the store, as well as key chains, “cold cut” coasters, and stacking vessels.

Boerum submerses potential buyers in the notion that design objects and furnishings can be built in and thought about in conjunction with the design of their homes. Even after the Flank sales room moves in, likely later this year, some portion will be retained for the Boerum House & Home shop items. This is the beauty of the living-organism retail environment: design and home become one.