With the 2020-2021 NBA season quickly approaching, the Brooklyn Nets have unveiled new threads. For this year’s City Edition jerseys, the Nets have chosen to pay homage to Brooklyn-born artist Jean-Michel Basquiat. Basquiat was an artist of Haitian and Puerto Rican descent whose paintings explored themes such as segregation, racism and income inequality. In 1983, … The post Nets pay tribute to Brooklyn’s Jean-Michel Basquiat with new uniforms appeared first on Brooklyn Eagle.

With Friday’s win over the Mavericks your Brooklyn Nets are 9-1 in 2014. To what do we owe this pleasure? Something turned around with this team starting in Oklahoma City.  What exactly was it? How has it sustained itself. (it is always having to do with the secret, which means it’s not really about basketball) Then what are tangibles that we can point to that indicate the manifestations it on the court in the new year? Serval things. 1. The team refigured it’s identity in the wake of Brook Lopez’s season ending injury.  Blatche and Garnett play at center and always have a stretch power forward to space… 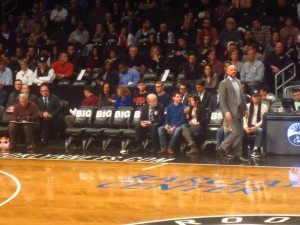 Hawks 86 Brooklyn 91 Brooklyn overcame shorter smaller breakdowns and knocked off the team (Atlanta) currently with 3rd best record in the East.  The Nets did not look great, but that is 3 wins in a row and no one will give it back.  Deron Williams did not play for the 12th time this season. The Nets received better all around play from point guard Shaun Livingston, and clutch play from cool Joe Johnson, who, though he did hit the winning shot in Oklahoma City had not notched double figures for scoring in 5 contests.  The Daily Dime called him “Iso-Joe” multiple times on Monday night after a 4th quarter of Nets …